KTM WANT A MOTOGP TITLE. EVEN IF IT TAKES TEN YEARS!

You are here: Home › KTM WANT A MOTOGP TITLE. EVEN IF IT TAKES TEN YEARS!

All eyes at the KTM Factory in Mattighofen, Austria are firmly fixed on a MotoGP crown. And they donâ€™t care how long it takes to get one. The KTM management are determined to do it KTMâ€™s race-winning way.

The same way KTM has won multiple World Motocross, AMA Supercross and Moto3 Titles plus winning the Dakar Rally 16 times in a row.

KTM are ignoring their Japanese competitors Honda and Yamaha who have been sharing GP road racing wins since the 80â€™s. The Austrian factory are relying on their in-house expertise and technology to field a MotoGP machine equipped with a steel frame rather than the more conventional aluminium delta-box beam frames. And the KTM bikes will run with their own brand of WP suspension, unlike Honda, Yamaha, Aprilia and Ducati who have favoured the Ohlins set-ups. 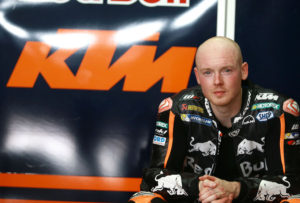 KTM engineers and technicians have already made a great start to the 2017 season, with pre-season testing showing the new KTM RC16 GP V4 machine will be competitive in the hands on newly-signed Bradley Smith. But in typical KTM style, the Factory is prepared for the long haul and fully realise success in MotoGP will not come easy.

â€œWe are very confident that we can build our chassis slightly lighter than aluminium frames and on the MotoGP weight limit. We use a high-end chromate steel, very light with a very thin wall thickness that allows a smaller frame area for better airflow around the engine. This is why we donâ€™t waste energy thinking about anything else.â€

â€œWe will use our expertise in tube production for very quick reaction times, to transfer the feedback from riders. It is our advantage, not a disadvantage.â€

KTMâ€™s V4 engine layout is similar to most of itâ€™s competitors, but KTM doesnâ€™t see top speed as an issue; instead, it recognises that corner exit acceleration is now the competitive focus in MotoGP.

â€œThe punch off the bottom is where the engine needs to be stronger, thatâ€™s our priority â€“ nice roll-on power for the rider. The top speed is good,â€ Beirer notes.

In 2017, KTM will also field a machine in the Moto2 class to join itâ€™s now established Moto3 efforts. Now with a bike in all 3 MotoGP classes no-one can say the factory is not serious about carrying itâ€™s off-road domination onto the tar. 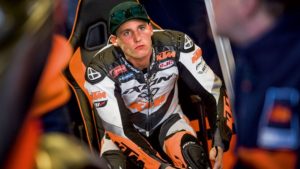 When KTMâ€™s Bradley Smith and Pol EspargarÃ³ line up for MotoGP Round One on March 28th at Qatar, the factory will make history once again. 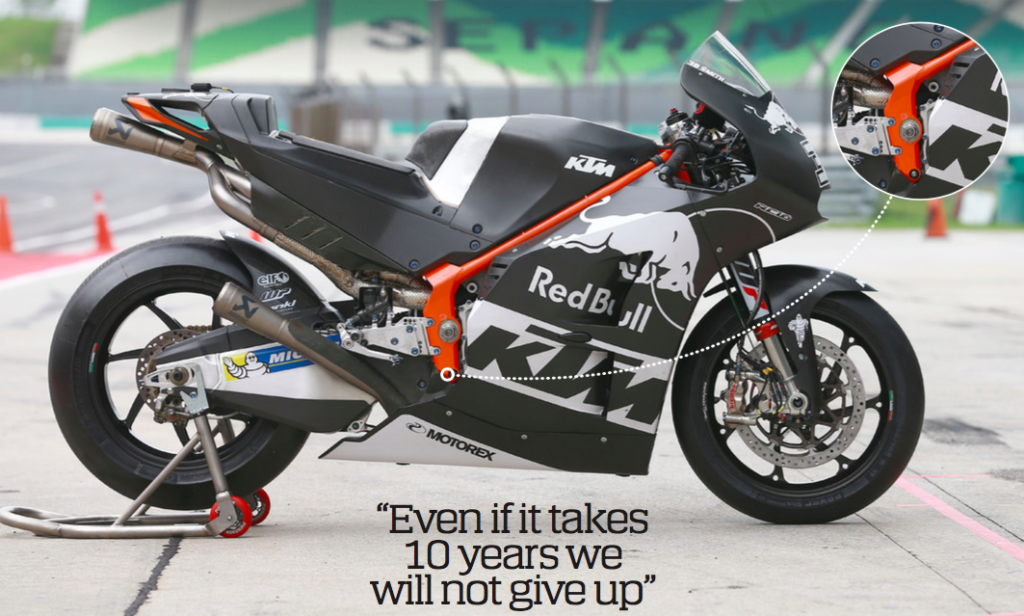